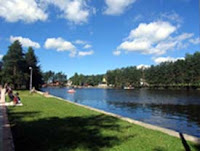 Serbia apparently is developing an answer to Spain's legenday Costa del Sol, the "Costa del Crime," to whence British and other gangsters would escape to live a life of luxury.

According to Balkan Insight, the Serbian resort town of Zlatibor and other resort towns have become havens for Serbian organized crime.

Situated at an altitude of just over 1,000 meters, Zlatibor is a climatic resort, characterized by a cool mountain climate, clean air, long periods of sunshine during the summer and a heavy snow cover in winter. Tourist facilities include modern hotels, holiday centers and cottages, sports grounds and skiing.

Medical services are provided by the staff of the Special Institute for the Prevention and Treatment of Thyroid Gland Disorders and the Rehabilitation of Patients. Modern methods of treatment are being utilized, including ultrasound techniques, stimulator's, diathermy and iodized and galvanic baths.

Notable successes have been achieved in the diagnosis, treatment, rehabilitation, and prevention of different kinds and stages of thyroid gland diseases.


Wikipedia provided the photograph in this post.
Posted by Duncan Kinder at 8:14 PM